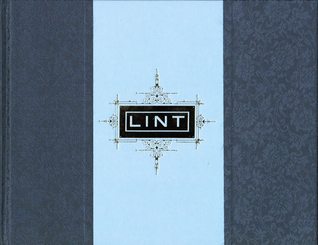 Image is the cover of Acme Novelty Library #20 by Chris Ware; it is a blue rectangle with darker damask stripes on the sides and light blue in the middle, and the word LINT in the center.

One of my friends’ kids’ has a phrase he uses to politely express that he doesn’t like something: “It’s not my favorite.” I love that! So here are some recent reads that were just… not my favorites.

* The Journal of Best Practices: A Memoir of Marriage, Asperger Syndrome, and One Man’s Quest to Be a Better Husband by David Finch. This memoir was recommended to me by someone who knows I am autistic and married to someone who isn’t. It had some funny bits – I did enjoy Finch’s sense of humor – but mostly I just found it frustrating. It’s full of unhelpful stereotypes, misinformation, and I was annoyed by both Finch and his wife in equal measure. Finch buys into the myth that autistic people lack empathy; this is just plain wrong – has been proven to be false. I think he’s just an insensitive, selfish dude and the (outdated, wrong, mythical) notion that he’s not capable of empathy served as a convenient excuse for him to behave like an ass. On the other hand, his quest to stamp out his own autistic traits was disturbing and misguided. I shudder to think what ableist people will think when reading this (autistic people can stop being so autistic if they just try harder!). I also kinda wonder why it was recommended to me. Huh.

* Cecil and Jordan in New York: Stories by Gabrielle Bell. A set of short stories in graphic novel form, I wanted to like this book but was frustrated by it so much that I ended up disliking it. Each story started out with promise and pulled me in, but each one ended so abruptly that I did a double take. I don’t mind an ambiguous end if it feels crafted in such a way to imbue meaning, but these just cut off suddenly and left me unsatisfied. There also was a weird misogynistic undertone that I wasn’t sure how to interpret – satirical? Or just dark? Most people on Goodreads seem to love it, though, so maybe I just didn’t get it.

* Best of American Splendor by Harvey Pekar. I loved the movie American Splendor, so I thought I would dig this book, but. Gosh. It was awful. Walls and walls of text on top of visually busy drawings. It was like screamo for my eyes, but like the most boring, banal screamo you could ever imagine, all about making appointments and working as a filing clerk. The best parts were stories about people OTHER than Harvey Pekar but they were too few and too far between. Honestly I just skimmed most of this book. Moving on.

* Blue by Pat Grant. Graphic novel very loosely based on the author’s life, about growing up (white) in Australia during an immigration boom. Three working class kids skip school to go surfing and find a dead body; meanwhile, the immigrants are represented as actual outer space aliens who ruin the little white-people town by being weird and gross. I was waiting for an ending in which things are tied together somehow or the aliens turn out to be people too in some way but it just kind went out on an “immigration sucks” note that was rather baffling. I also felt like I was missing a lot of Aussie cultural references. Oddly enough though, the Afterword to this book was really great. Grant reveals that he is NOT a xenophobic anti-immigrant racist (so why he wrote the story this way I do not know) and offers up some great insights about comics and surfing. So maybe borrow it from the library and just read the afterword.

* Acme Novelty Library #20 (aka LINT) by Chris Ware. I saved the worst for last, as I barely have words for how much I loathed this graphic novel. Graphic novel nerds mostly say that this is a masterpiece, but I found its unrelenting misery and misogyny to be mostly just repulsive. The story of Jordan Lint is a miserable, depressing story about a terrible person who has a shitty life, treats everyone around him atrociously, never redeems himself, and then dies. This grim tale is juxtaposed over Ware’s extremely abstract graphic artwork, reminiscent of a bathroom gender sign, which is certainly interesting, but so dry and airless that it made the story itself feel even more brutally nihilistic. I guess I might see the artistic value in this if so much of it didn’t depend on the sexual degradation of women to fuel its grisly narrative. Just, yuck.